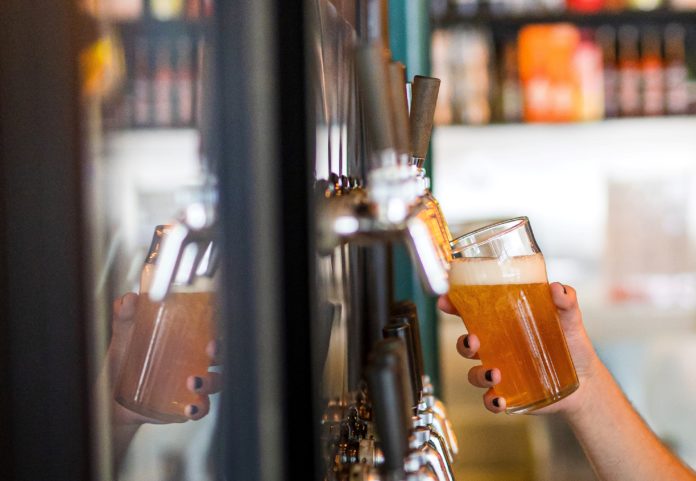 As the craft beer scene in Queensland grows, local breweries continue to make their mark on the tap lists of local bars and pubs.

Queensland boasts some true heavy-hitters in the craft beer space, with new and exciting microbreweries popping up across the state.

If you’re looking for a great selection of home-grown Queensland craft beers, we’ve got you covered. Here are some of the best craft beer bars in Brisbane that showcase local brews!

Looking to sip right at the source? Check out our list of Brisbane’s Best Breweries and Microbreweries.

One of the OG craft joints on the scene, Tippler’s Tap got their start as a small watering hole in Newstead’s Masters Street. That was back in 2012, and since then they’ve grown into a Brisbane institution, with two venues in the city – one in South Bank and one on James Street in Fortitude Valley.

Both locations have an impressive line-up of local taps, showcasing everything from stalwart breweries like Black Hops and Newstead Brewing Co to up-and-coming stars.

Their taps are constantly rotating so there will always be something new to try. They’ve recently launched what can only be described as a “robust” food menu to accompany their tipples. We hope your eyes are as big as your stomach.

The Scratch promises “sh*t chat, good beer, great hair”. Far be it from us to comment on the hair or chat, but judging by the number of local taps on offer, they certainly deliver on the beer side of things.

This Milton bar has quickly become a favourite for craft beer lovers in Brisbane. With rotating taps (and an ever-changing bottle list), you’re spoilt for choice when it comes to local brews.

The bar promises a “No BS” approach to beer drinking. You won’t find these guys pulling out any novelties or bells and whistles, but you will find consistently exceptional brews.

Tucked away on Vernon Terrace, you’d be forgiven for thinking Zero Fox was another one of its neighbouring cafes. What it is, in fact, is the purveyor of some truly exceptional ales and mouth-watering bites.

Zero Fox is located in Brisbane’s iconic Woolstores. The space might not be expansive, but what they lack in size they more than make up for in personality.

The team are true connoisseurs of craft beer, and passionate about sourcing their brews locally. A Japanese/Korean inspired menu accompanies their drinks list. We’re partial to their chicken wings.

Blink and you’ll miss it. Super Whatnot is hidden in a laneway in the heart of Brisbane CBD, but it’s well worth seeking out.

This tiny bar has a selection of rotating taps, and an impressively stocked fridge of bottles and tins. You’ll find the likes of Sea Legs and Brouhaha here. They also have a killer selection of spirits and wine if you’re not feeling like beer, and make a mean cocktail.

Once upon a time, an artist named Steen Jones decided to close the doors to his own New Farm bar, Deathproof. But instead of farewelling the concept entirely, he passed it on to a local couple. They put their own spin on the place and HellBound was born.

HellBound remains a favourite among locals. You’ll find them dishing up local beers from sours to stouts, alongside Australian wines and some very American-style grub.

The venue doesn’t seat a huge number of people but it’s got all the atmosphere and charisma of any of Brisbane’s favourite watering holes. Don’t expect any pretentious beer snobbery here. HellBound embraces the grungier side of Brunswick Street.

You’d be hard-pressed to find Archive empty on any given night, and with good reason.

Archive underwent a pretty major renovation back in 2018 but kept its core favourites: notably their bar made of books and, of course, dedication to craft beer. Among crowd favourites like Little Creatures, Archive offers rotating taps and cans so there is always something new and exciting to wrap your laughing gear around.

Archive also does a great job of taking a very large venue and still making it the perfect cosy spot to sit and sink a couple of pints.

Did we mention their food menu is an absolute winner? You can’t go past their classic beer-battered fries with aioli.

Twelve rotating taps feature our favourite local brewers on the reg, plus a fridge stocked full of funky cans from Queensland brewers.

Our pick? Go for the poutine.

Did we miss your favourite watering hole? Drop us a line at editor@mybrisbane.com

Pop Down to Bulimba for this Beguiling New Pop Up