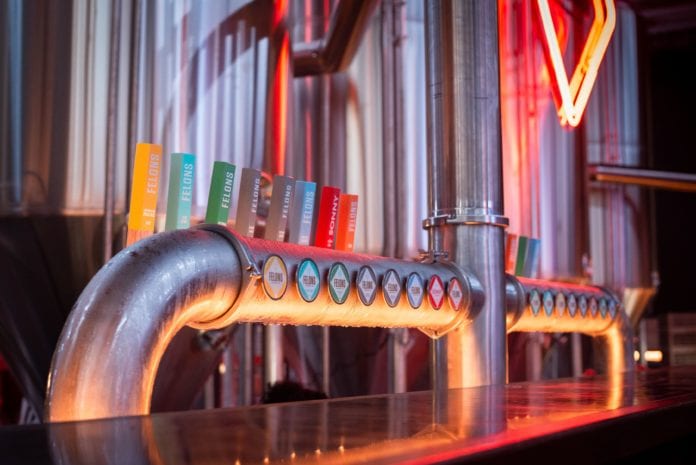 It’s 4pm on a sunny Friday afternoon in Brisbane and you are absolutely fiending a coldie. Then you see the shining red beacon that is Felons Brewing Co., nestled upon the shores of the brown snake. The schooners are calling your name. You can smell the rich scent of hops in the air and before you know it, you are perched on a trusty wooden stool with a beer in one hand and a pizza in the other. Thank brew very much!

Since its opening in late 2018, Felons Brewing Co. at Howard Smith Wharves has undisputedly become Brisbane’s favourite waterfront brewery, and thanks to its ever-growing popularity your favourite local has just scored another venue to knock back a few Felons coldies – The Felons Barrel Hall!

Over the past couple of months the Howard Smith Wharves organisation has been secretly creating and curating the expansion of Felons Brewing Co. by transforming the Howard’s Hall function space (an under-utilised functions venue left barren since the pandemic) into a brilliant beer barn that redefines beer and the brewery experience! The Felons Barrel Hall, inspired by the German beer halls of Europe, is serving up steins of uniquely aged beers, a punchy, flavoursome menu and a plethora of cultural performances amidst a sea of French and American Oak barrels and banter.

The team at Felons Brewing Co. have crafted a menu of unique beers with an adventurous spirit, aged in hand-selected ex-wine barrels, and poured from one of the 6,000 litre kegs. You can sip on a half litre or one litre stein full of your favourite Felons classics or try one of their limited and seasonal release beers on offer at the Barrel Hall. These specially aged beers celebrate local produce, and offer a kaleidoscope of new and exciting flavours for Felons’ fans to try. “We invite the Brisbane community to come with us on this journey of discovery at Felons Barrel Hall as we unearth the magic of barrel conditioning and blending beer,” says Head Brewer, Tom Champion.

The rich Felons flavours don’t just stop at the beer because these guys are also delivering a bold, unpredictable food menu! From decadent rainbow painted crayfish to Moreton Bay bug loaded fries, locally and sustainably caught coral trout and a range of vegetable and salad options packing a punch. Every mouthful on this menu can be paired with a stein of crisp and hazy Felons Natural Ale, and for those who prefer wine, there is an all-Aussie wine list making its debut in the Hall.

Not only does The Barrel Hall feature refreshing beers and a punchy menu, but it plays host to live performances every weekend! From smooth family-friendly sounds to emerging artists to some of Australia’s leading performers, along with viewings of arthouse films and interactive performances, Felons Barrel Hall is putting on shows you won’t want to miss.

The Barrel Hall is open from 11am – late Thursday – Sunday and is without a doubt, the best destination for locals and visitors alike to sip on a range of fresh Felons beers, indulge in delicious food and enjoy a colourful blend of live cultural performances along the Brisbane River.

With all of the fun festivities of the silly season in full swing, we know how easy it can be to splurge...
Read more
22,965FansLike
103,143FollowersFollow
2,823FollowersFollow