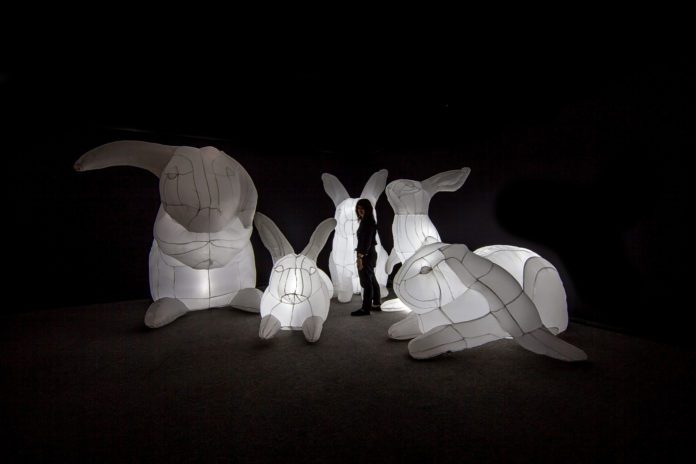 The big ol’ bunnies are part of an exhibit beginning March 29. Australian artist Amanda Parer’s “Intrude” art exhibit features three rabbits from her collection of world-traveling illuminated bunnies, which are being installed at Brisbane Quarter at 300 George Street.

Cities around the globe have hosted these huge hoppers, and now (for a little while anyway) they’ll call Australia home.

Intrude offers Brisbane art lovers an opportunity to get up-close and personal with these ethereal creatures.

While you’re in Brisbane Quarter make a point of sampling their elegant restaurants, including Persone, Phat Boy, Phoenix, and Tenya.

The use of Intrude’s rabbits was all about the conflicting qualities of the animals, according to artist Amanda Parer.

“Rabbits represent fairy tales, childhood and furry innocence but to Australians, they are also a feral species, introduced by white settlers and leaving a trail of ecological destruction wherever they go, defying attempts at eradication,” she said.

“The artwork, like any good fairy tale, works from both the light and the dark. It has been fun to use these motifs to explore our relationship with the natural world.”

Intrude will be on at Brisbane Quarter, 300 George Street from March 29 to April 17 on Podium One.